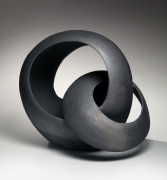 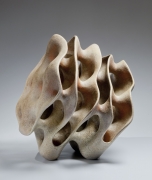 Kurokawa’s works are coil-built hollow-core geometric forms with palpable mysterious presence. His initial sculptures evoked the natural formative process of coral and plants as they captured the dynamism of natural movement without actually replicating any specific form. In his recent body of work, the shapes are inspired by mathematical calculations and formulae but remain fired in a traditional climbing kiln, often using smoke in the natural, exceptionally high-temperature firing process causing the surface to have a metallic carbonic finish. Through his unique creative processes, Kurokawa creates sculptural forms that stand apart from those by any other Japanese artist.

As an undergraduate he first studied sculpture before focusing on ceramics, which in turn led him to further study in graduate school and where he remains a teacher. Early on, Kurokawa won the important Chōza Grand Prix in 2007 for his large mesh-patterned work inspired by blue coral.