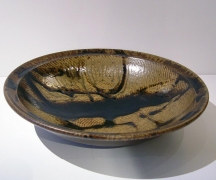 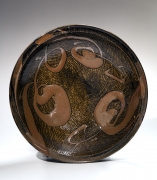 Shimaoka Tatsuzo was the foremost pupil of Hamada Shoji (1894-1978) until his recent death, was regarded as Japan's leading folk craft potter. Shimaoka's signature style, known as "Jomon-zogan" in Japanese, combines cord-impressed decoration and the white-slip inlay technique used in the Punch'ong ware, popular in the Choson Dynasty of Korea. Shimaoka's use of a variety of glazes enhanced the richness of his folk style tableware. He also successfully developed a Western-influenced salt glaze technique that Hamada had first introduced. For his mastery of the Jomon technique of rope-impressed stoneware, he was named a Living National Treasure in 1996. He was also an incredibly influential teacher of a new generation of ceramists.