Round, iron-glazed vessel with wide mouth and resist-splattered patterning on the upper-half 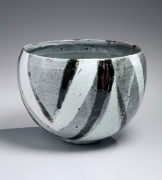 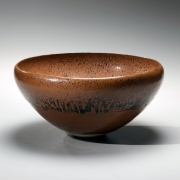 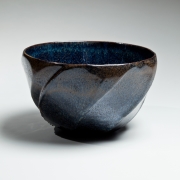 Born in Kyoto in 1926, Shimizu Uichi was one of the foremost Kyoto-based artists of his time. Having studied under Living National Treasure Ishiguro Munemaro (1893-1968), one of the earliest proponents of Chinese-style ceramics, Shimizu often experimented in recreating historical Chinese-style wares, especially those with iron-glaze. In 1970, he left Kyoto and headed to the western shore of Lake Biwa in Shiga Prefecture in order to build his own noborigama (climbing kiln). After establishing the kiln, which he named Horai-yo, Shimizu began firing craquelure celadon glazed works. Throughout his career Shimizu accomplished many technical and artistic achievements, especially with celadon and iron-glazed works. He was appointed a Living National Treasure in 1985 for his application of tetsu-yu (iron glaze).