Glazed stoneware and stainless steel base

Stoneware with wooden base 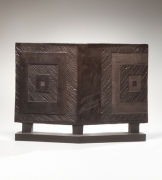 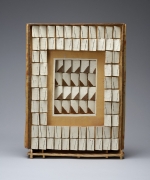 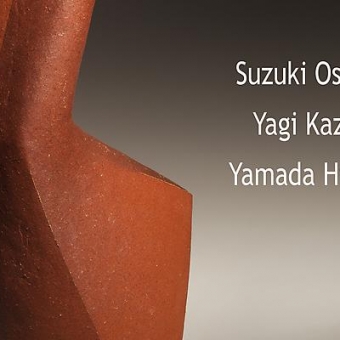 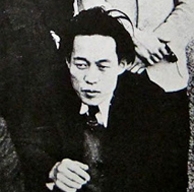 The son of a Buddhist priest who later became a ceramic artist, Yamada Hikaru was born in Tokyo, though raised in the ceramic center of Gifu. However, it was in Kyoto where he received his professional training and met fellow ceramist Yagi Kazuo (1918-1979), with whom he formed the Young Pottery-maker’s Collective in 1946. Two years later with Yagi and fellow ceramists Suzuki Osamu (1926-2001), Kano Tetsuo (1927-1998), and Matsui Yoshisuke, the group formed the avant-garde ceramic group Sodeisha (Crawling through Mud Association). Like Yagi, Yamada initially worked on functional vessels. By the 1950s, his vessels had extremely narrow non-functional openings, and soon after he closed them entirely. Using a multiplicity of glazes and shapes, Yamada focused on perforated flat forms allowing the viewer to see through the work, creating a “borrowed landscape.” Also an inspirational teacher at Osaka Art University, he sought to deconstruct the vessel, rendering them as two-dimensional representations.