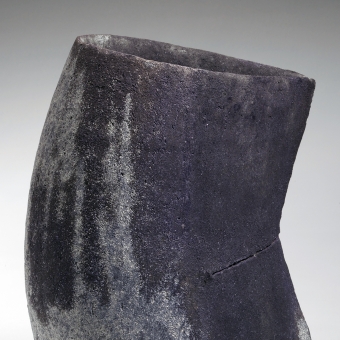 Joan B. Mirviss Ltd. is honored to open its autumn season with an exhibition of more than twenty new works by Japanese master ceramist MIHARA KEN (b. 1958). Marking the US debut of Mihara's latest series entitled Kodô (literally "pulse"), this will be the artist's second solo exhibition in the US and with the gallery.

Mihara will also be giving an informal Gallery Talk at 11am on Wednesday the 14th. Space is limited, so please reserve your place by contacting the gallery at your earliest convenience by clicking through this link: Yes, I'd like to attend the artist talk

Kodô is the third body in an ever-evolving dialogue between this artist and his medium. Mihara's first collection was titled 'Serenity,' the next 'Genesis' and now, with 'Pulse,' his work has taken on a sense of movement and vitality. As the title suggests, these works embody an exciting burst of energy and life. Using clay from his native Shimane prefecture, an idyllic enclave where the Shinto gods are said to return each October, Mihara hand-builds all of his forms in an organic process informed as much by the surrounding landscape as by his direct experience handling the clay. Previously known for austere linear vessels, he now creates forms that evince both fluidity and plasticity. Though sometimes reminiscent of ancient bronzes, these strong, serene forms are taken in a fresh and original direction.

Using his own method, Mihara transforms the medium in a process he feels "revitalizes the memory of the clay." By applying a silica slip between the bisque firing and first full firing, he protects the clay from the direct effects of the high heat. He then scrapes off the slip and fires the work once again. Repeated high-temperature firings in a reduction atmosphere, often lasting 30 to 40 hours per firing, coaxes a range of brilliant colors from the clay body itself without the use of colored slip or glaze. Due to adjustments Mihara has made in firing this new work, colors such as pale pinks and greens join his already well-known pallette of purple, blue and orange.

Mihara was awarded the prestigious Japan Ceramic Society Award in 2008 and Shizuoka Prefecture's Cultural Encouragement Award in 2009, adding to the long list of awards and accolades he has received to date. His works can be found in the collections of many important museums in Japan and in the West including the Los Angeles County Museum of Art; Metropolitan Museum of Art; National Museum of Modern Art, Tokyo; New Orleans Museum of Art; Peabody Essex Museum; Philadelphia Museum of Art; Victoria & Albert Museum, London; and Yale University Art Gallery.