Multi-toned round vessel with silver slip 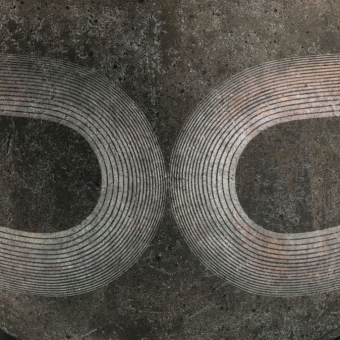 NEW YORK - JOAN B MIRVISS, LTD. is excited to present Depth of time: The Clay Art of Iguchi Daisuke. First introduced to the gallery five years ago by two prominent Japanese curators as the leading young talent in northern Japan, Iguchi Daisuke's career trajectory has been exceptional. Specifically selected for thsi show, his first outside Japan, this stunning body of work will be on view to the public from March 12th onwards in conjunction with Three Giants: Kamoda Shoji, Matsui Kosei and Wada Morihiro, also at Joan B. Mirviss, as part of Asia Week in New York City. Those three celebrated masters worked in the same northern region and it was Kamoda who most profoundly epitomizes the best 20th century Japanese clay art. This substantial mantly of creativity is now carried by the young Iguchi Daisuke from nearby Mooka, the town adjacent to Mashiko.

Iguchi's works are noted for their modern and elegant forms and their seemingly soft exterior surfaces. Using his highly unique process, he applies after an initial low-temperature bisque firing, a classic ash glaze made from dried rice husks and then re-fires at full temperature. When cooled, he sands the surface of each vessel with a special wire brush to bring about a slightly textured surface with a tarnished or oxidized appearance. Then, using extremely thin strips of tape, he creates decorative geometric patterning with an application of silver-slip glaze, firing again at a lower temperature. Finally, he polishes the surface to bring out his desired effect. Due to technical variations in his firing times, clay color and the degree of oxidation during the final firing, the seductive surfaces of these powerfully elegant vessels also flucuate, organically uniting form with surface. Evocative of ancient forms and patterns, these vessels have been said to exude a near magical force.

Iguchi Daisuke was born in 1975 in Tochigi, Japan and graduated from nearby Tohoku University of Art and Design with a degree in ceramics. After graduation he studied further with Uraguchi Masayuki. Since becoming independent in 2004, he has exhibited in numerous group and solo shows throughout Japan. In 2008, Iguchi won the Judge's Special Prize at the Mashiko Togeiten. In 2014, he also won the Governor of Tokyo Prize in the 54th Eastern Japan Traditional Arts and Crafts Exhibition. Already Iguchi Daisuke's work have been acquired for the permanent collections of the Mashiko Museum of Ceramic Art and the Ibaraki Ceramic Art Museum.