Glazed porcelain with gold and silver glazes over red overglaze

Glazed stoneware with a thin layer of porcelain clay

Chōtō; "Listening to the Waves"

Flattened vase with flared base 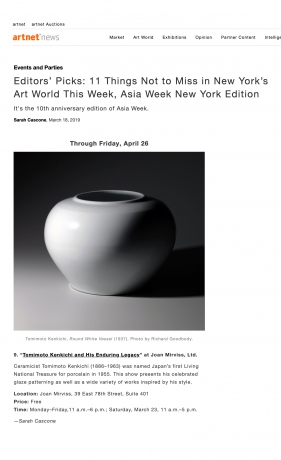 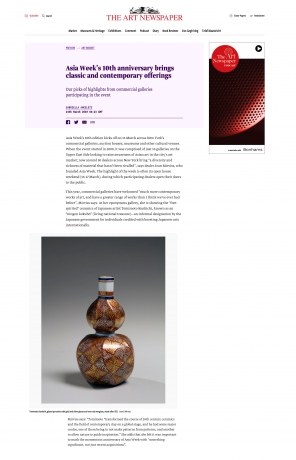 Mirviss says: "Tomimoto "transformed the course of 20th century ceramics and the field of contemporary clay on a global stage, and he had some major credos, one of them being to not make pattern from patterns... 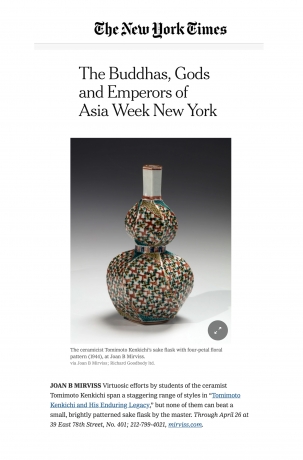 The Buddhas, Gods and Emperors of Asia Week New York 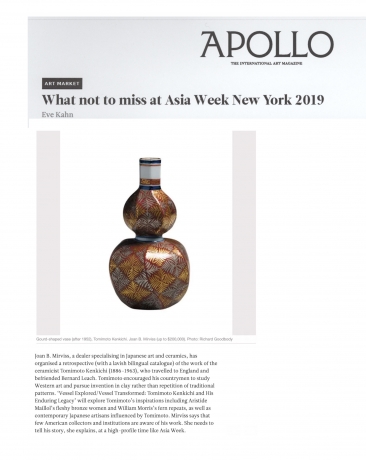 Joan B. Mirviss, a dealer specialising in Japanese art and ceramics, has organized a retrospective (with a lavish bilingual catalogue) of the work of the ceramicist Tomimoto Kenkichi (1886-1963), who travelled to England and befriended Bernard Leach. 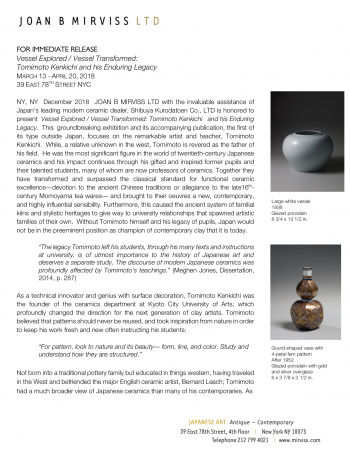 NEW YORK, NY December 2018 JOAN B MIRVISS LTD with the invaluable assistance of Japan's leading modern ceramic dealer, Shibuya Kurodatoen Co., LTD is honored to present Vessel Explored / Vessel Transformed: Tomimoto Kenkichi and his Enduring Legacy. This groundbreaking exhibition and its accompanying publication, the first of its type outside Japan, focuses on the remarkable artist and teacher, Tomimoto Kenkichi. While, a relative unknown in the west, Tomimoto is revered as the father of his field. 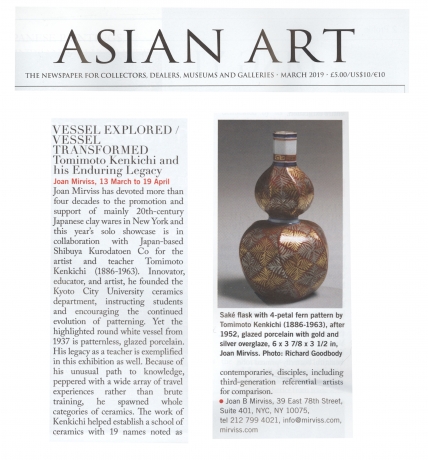 Joan Mirviss has devoted more than four dcades to the promotion and support of mainly 20th-century Japanese clay wares in New York and this year's solo showcase is in collaboration with Japan-based Shibuya Kurodatoen Co for the artist and teacher Tomimoto Kenkichi (1886-1963). 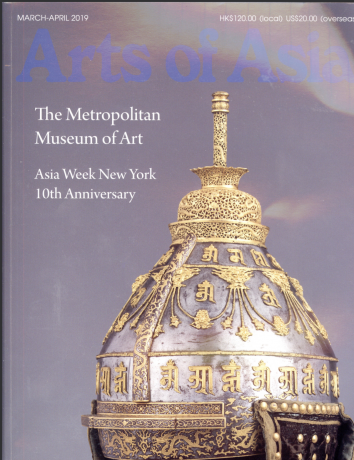 Joan B Mirviss Ltd, with the invaluable assistance of Shibuya Kurodatoen Co., Ltd, Japan's leading modern ceramic dealer, is honoured to present "Vessel Explored / Vessel Transformed- Tomimoto Kenkichi and His Enduring Legacy". Joan Mirviss explained: "Tomimoto is revered as the father of his field. He was the most significant figure in the world of 20th century Japanese ceramics and his impact continues through his gifted and inspired former pupils and their talented students, many of whom are now professors of ceramics." 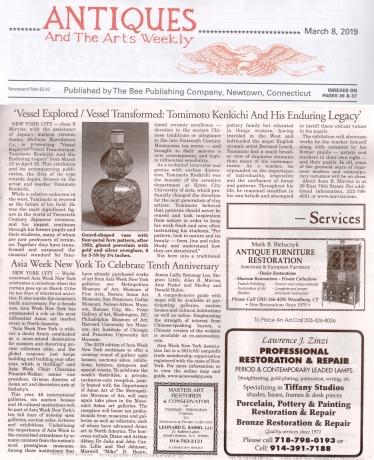 NEW YORK CITY - Joan B Mirviss with the assistance of Japan's modern ceramic dealer, Shibuya Kurodatoen Co, is presenting "Vessel Explored/Vessel Transformed: Tomimoto Kenkichi and His Enduring Legacy" from March 13 - April 20. This exhibition and its accompanying publication, the first of its type outside Japan, focuses on the artist and teacher Tomimoto Kenkichi.

NY, NY  March  2019  Our groundbreaking exhibition and its accompanying publication, Vessel Explored / Vessel Transformed: Tomimoto Kenkichi and his Enduring Legacy, the first of its type outside Japan, opens during Asia Week New York at Joan B Mirviss LTD. Presented in conjunction with  Japan’s leading modern ceramic dealer, SHIBUYA KURODATOEN CO., LTD., the exhibition focuses on the remarkable artist and teacher, Tomimoto Kenkichi (1886-1963).   While, a relative unknown in the west, Tomimoto is revered as the father of this field.  He was the most significant figure in the world of twentieth-century Japanese ceramics and his impact continues through his gifted and inspired former pupils and their talented students, many of whom are now professors of ceramics. Together they have transformed and surpassed the classical standards for functional ceramic excellence—devotion to the ancient Chinese traditions in tandem with an allegiance to the late 16th-century Momoyama tea wares–– and brought to their oeuvres a new, contemporary, and highly influential sensibility. Without Tomimoto and his legacy of pupils, Japan would not be in the preeminent position as champion of contemporary clay that it is today.

“The  legacy  Tomimoto  left  his students, through his many  texts

and instructions at university, is of utmost importance to the history

was profoundly affected by Tomimoto’s teaching.”

As a technical innovator and genius with surface decoration, Tomimoto Kenkichi was the founder of the ceramics department at Kyoto City University of Arts, which profoundly changed the direction for the next generation of clay artists. Tomimoto believed  that patterns  should never  be reused and  took inspiration from nature in order to keep his work fresh and new often instructing his students:

“For pattern, look to nature and its beauty–– form, line, and color. Study and understand how they are structured.”

Not born into a traditional pottery family but educated in things western, having traveled in the  West and befriended the major  English ceramic artist, Bernard Leach, Tomimoto had a much broader view of Japanese ceramics than many of his contemporaries. As a teacher, he expounded on the importance of individuality, originality, and the confluence of forms and patterns. Throughout his life, he remained steadfast in his own beliefs and attempted to instill these ethical values in his pupils.

Vessel Explored / Vessel Transformed: Tomimoto Kenkichi and his Enduring Legacy will showcase works by the teacher along with ceramics by his former pupils, artists and teachers in their own right,  and their pupils. Noteworthy among this illustrious group are  Kamoda Shōji, Kondō Yūzō, Kuriki Tatsusuke,  Matsuda Yuriko, Tamura Kōichi, Tsuboi Asuka, Wada Morihiro and Yanagihara Mutsuo. From the third generation are Hayashi Kaku, Koike Shōko, Kondō Takahiro, Maeda Masahiro, Matsui Kōsei, Ogawa Machiko, and Tashima Etsuko.  Masterworks by many of the greatest stars of Japanese modern and contemporary ceramics will be on view, some created specifically for this important exhibition.

Additionally, to give further historical context to the show, the exhibition will include vessels by several of Tomimoto’s renown contemporaries in the field: Hamada Shōji, Kawai Kanjirō, Kitaōji Rosanjin, Kiyomizu Rokubey VII, and Yagi Kazuo, all of who took independent paths.

In our accompanying scholarly publication, we are honored to include scholarly essays by noted experts: Kida Takuya, Professor at Musashino Art University and author of numerous articles on this topic, Meghen M. Jones, Assistant Professor of Art History at Alfred University who wrote her dissertation on Tomimoto; and emerging scholar Trevor Menders. Their essays are complemented by recollections from several of Tomimoto’s former pupils and pioneers in their own right.

Click here for a PDF of the accompanying publication