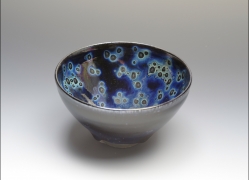 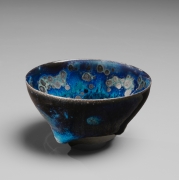 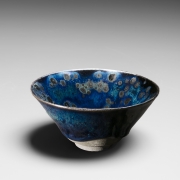 Seto became interested in ceramics while a student of sculpture at Tokyo Zokei University. After graduating, he studied at Aichi Prefectural Ceramics Training School. Following his time in Aichi, he extensively researched Shino, Oribe and ki-seto glazes, working to create his own versions of these important styles.  Later, inspired by a ceramic history book he found in Yokohama, he began experimenting with tenmoku glazes and in 1990 he succeeded in finally creating his own nogime tenmoku (hare’s fur).

His unanticipated success with this complicated process further encouraged Seto and he tried to recreate one of the most difficult types of iron-glazed ware­– yōhen tenmoku (tenmoku with a shining-star effect). This style of tenmoku is the result of applying a thick, violet-black iron glaze to a grayish black body itself containing a high iron content. In the firing process brilliant iridescent star-like spots appear on the surface of the ceramic.

Currently there are only three yōhen tenmoku teabowls in Japan and all are designated National Treasures in Japan. They are thought to have been made at either the Jian-yao kilns in Fujian during the Song dynasty. In 2002, Seto has produced his own version of a yōhen tenmoku teabowl with glistening iridescent, blue-and-rainbow-colored stars. It was featured in Nihon Keizai Shimbun (Japan’s Wall Street Journal) next to one of these national treasures. However, Seto, not satisfied with these efforts and striving for perfection, continues his pursuit of the ideal yōhen tenmoku.