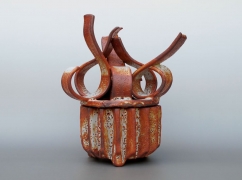 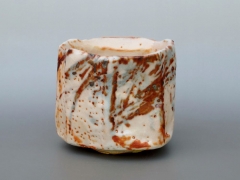 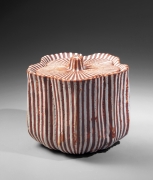 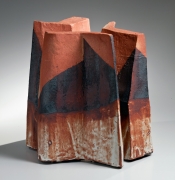 The eldest son of a talented ceramist, Suzuki Osamu (Kura) first learned ceramics at the knee of his father. As a youthful potter, he visited and studied many of the local ancient kilns in the Mino area and marveled at the kiln building, firing, and throwing methods that trace their origin to the 16th century.  However despite the sophistication and brilliance of the ceramics of the Momoyama era, Suzuki believes that he is best able re-cast his ideas of contemporary shino using a gas-fired kiln, for which he employs modern firing theories and scientific methods.  Through exhausting experimentation, Suzuki has developed his own shino that has been viewed as traditional shino-yaki, but with his noteworthy thicker walls, longer firing time and slow cooling periods his works possess an air of modernity and dynamism not found elsewhere.

Principally dedicated to the Mino tradition of Shino ware, Suzuki also has created oribe and black Seto ceramics, with a strong leaning toward implements for the tea ceremony. He considers Shino the most appropriate ware for the expression of Japanese aesthetics and sensibility. In 1994 he was designated as the 2nd Living National Treasure (LNT), after Arakawa Toyozo, for Shino ware. In many ways, Suzuki Osamu may be seen as a new type of LNT, one who clarified the modern meaning of traditional Shino yet who also has created surprisingly contemporary, challenging, sculptural forms.