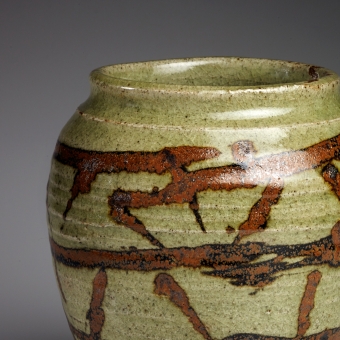 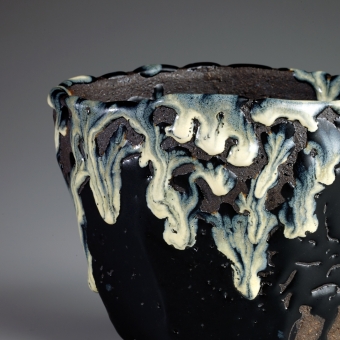 The clay artworks of Ishiguro Munemaro (1893-1968) and Tanaka Sajirō (b. 1937) are diverse in their scope, yet ultimately unified by a sense of tranquility. Although these two artists are from different generations and never collaborated, the opportunity to exhibit their ceramics side-by-side provides an intriguing look into the mutual sources of inspiration that fed the two minds of equally talented men. Tanaka looks to Ishiguro as an artistic and scholarly model, patterning his lifestyle in accordance. Like Ishiguro, Tanaka established his studio in the mountains, a landscape conducive to his art, practicing Buddhism and composing Chinese poems. Together, these interests influenced lyrical ceramic forms that echo artworks of the past.

In celebration of this connection, Joan B. Mirviss, LTD and Shibuya Kurodatoen Co., LTD in Tokyo are honored to present Poetic Reflections: Ishiguro Munemaro and Tanaka Sajirō, an exhibition in which Tanaka pays homage to Ishiguro by carrying the torch of a shared aesthetic vision. Kuroda Kōji of Kurodatoen remarks:

“Ishiguro and Tanaka did not settle for one design even after perfecting it. They continually pursued new techniques by changing materials and firing methods. In reverence to Ishiguro’s masterful oeuvre, Tanaka has carefully selected and created works for this exhibition.”

ISHIGURO MUNEMARO (1893-1968): Born in Toyama Prefecture, Ishiguro’s fascination with ceramics was first kindled in 1916 by his study of the Chinese language and arts. Just a few years later, Ishiguro encountered a yōhen tenmoku teabowl at the Tokyo Art Dealers’ Club that captivated him so much that he decided to become a ceramic artist. He opened his own kiln and studio in the mountains of Yase where he then lived as a hermit, dedicated to his art and studies. Ever the free spirit, Ishiguro developed an unrivaled variety of glazes including, but not limited to, kuro-raku, sançai, tenmoku, aka-e (red-painted ware), oribe and many variations of Karatsu.

In part, Ishiguro’s stylistic breadth mirrors a change in the perception of ceramics as a fine art, which occurred in the 20th century. Consequently, he asserted an unprecedented amount of self-expression within the classical ceramic styles he so admired. In this exhibition, Ishiguro’s sense of whimsy is also highly evident from the uncommonly used chōku-gaki (chalk-like-glaze drawing) to the incised depiction of a suiko (water sprite) to his signature lattice iron-oxide brushwork. Ishiguro’s artworks are not just a reflection of his career, but also of his life: serene, cerebral and undaunted.

In 1955 Ishiguro was one of the first of five ceramists to earn the prestigious designation of Living National Treasure for his iron-glazes and also received medals from both the government and emperor. This year, there is a major retrospective of his work travelling to various Japanese museums. Ishiguro’s work resides permanently in important collections including the Aichi Prefectural Ceramic Museum; Musée National de Ceramique, Sèvres, France; Museum of Fine Arts, Boston, MA; National Museums of Modern Art, Kyoto and Tokyo.

TANAKA SAJIRŌ (b. 1937): An unlikely ceramist, Kyūshū-born Tanaka Sajirō was a speedboat racer for many years in his youth. When he decided to exchange his fast-paced lifestyle for more intellectual pursuits, he immediately felt drawn to the local Kyūshū tradition of Karatsu, a ceramic style derived from ancient Korean wares. A major turning point was his encounter with the renowned Katō Tōkurō (1898-1985), whose profound understanding of ceramics deeply inspired Tanaka to create works reminiscent of antique ceramics but with a vivaciousness all their own.

Tanaka believes in a hands-on process, whether finding and digging his own clay from the local Yamase hillsides, crafting his own tools, or building his own kiln in Ulsan, South Korea. By using Yamase clay, his works have a soft, delicate feel and light color that gives them a femininity in contrast to the bold, rough clay used in typical Karatsu. This clay brings out the best features in his glazing and produces an interesting, wrinkled texture to the feet of his teaware. This exhibition reveals the balance that exists between his careful, controlled process and the impulses of his acute aesthetic sensibility. In this way, he not only creates Karatsu ware, but also ventures into uncharted territory.

The work of Tanaka Sajirō has been featured in several solo exhibitions at Kurodatoen, Shibuya; Mitsukoshi Art Galleries in Tokyo, Shinjuku, Chiba, Fukuoka, and Kurashiki. Most recently his work has been the focus of an exhibit at Mitsukoshi Art Gallery, Nihonbashi, Tokyo titled “Fighting with Fire.”

Joan B. Mirviss is the leading western dealer in the field of modern and contemporary Japanese ceramics, and from her NY gallery on Madison Ave., Joan B. Mirviss LTD exclusively represents the top Japanese clay artists. As a widely published and highly respected specialist in her field for over thirty-five years, Mirviss has advised and built collections for many museums, major private collectors, and corporations. Founded in 1969, Shibuya Kuradatoen Co., LTD has been the leading gallery for prominent exhibitions of master ceramists as well as a platform for launching new talents.

Joan B. Mirviss LTD is located at 39 East 78th Street in New York and is open Monday through Friday 11am-6pm and by appointment. For more information or to request high-resolution images, please call 212-799-4021 or email director@mirviss.com. For the full online exhibition brochure, please visit our website at www.mirviss.com. All photography is by Nomura Tomoya.